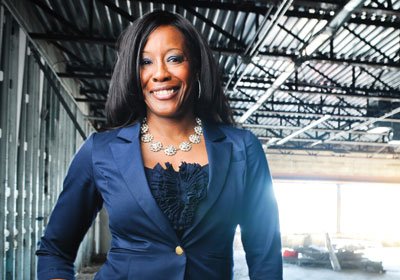 April 01, 2020 – Chiropractor Tara Watson has been through some tough times. But despite seemingly insurmountable challenges, Watson has remained doggedly committed to her two businesses, Watson Chiropractic and Exceptional Home Health. Floodwaters, tornadoes, and questionable actions by the competition have not deterred her. Annual revenues from her two businesses have surpassed the $1 million mark, and she’s opening a third, an Anytime Fitness franchise, which she sees as a good fit with her other health-related operations.

A 2001 graduate of Northwestern College of Chiropractic in Bloomington, Watson found her first chiropractic job at a North Minneapolis clinic. In 2003 Watson’s position was terminated, and she found herself with a non-compete agreement and no job. “I was applying for jobs and looking for a space where I could start my own clinic,” Watson says. “People weren’t looking for an associate. They were looking for someone to space-share, an independent contractor.” Watson found the cost of sharing space prohibitive, so she rented space temporarily in South Minneapolis while opening an office on Penn Avenue North, far enough away from her previous employer’s clinic that she wouldn’t be breaking the non-compete agreement.

“I was pregnant at the time,” recalls Watson, a single mother of one. “I’m by myself. I had to do the buildout. I had to figure it out and handle it all.” She financed the construction with credit card debt after being been turned down for a small-business loan, and then scheduled her first appointments for December 15, 2003. However, she never saw those clients. Instead she was in North Memorial giving birth to her son—six weeks ahead of schedule. Seven days later she saw her first client at Watson Chiropractic. In 2004, Watson received an operating loan from Boundary Waters Bank, in Woodbury.

Watson’s 2004 revenue reached $70,000, then more than doubled in 2005 to $170,000. By 2007, “I decided to branch out, so I started the home care business. I was referring out for this service,” says Watson, who financed the expansion with revenue from her practice. Exceptional Home Health offers home care to people with mental and/or physical disabilities who are on Medical Assistance. The business employs 30 to 40, mostly care assistants and nurses.

Watson once again was forced to move in 2008 when a competing chiropractor purchased the building where she practiced. She leased temporary space until she completed the purchase and buildout of a 10,000-square-foot building on West Broadway. “One side was a detail shop,” Watson says. “We are talking about a garage warehouse.” Watson financed the purchase of the building and construction from revenues generated by both of her businesses. In May 2010 she moved into her new building, hopeful that it would be her final move.

A month later, after two back-to-back days of heavy rainfall, Watson walked into her office one Monday to find two feet of standing water. Because her building is not located in a flood zone, she didn’t have flood insurance. “I had to dig into my pockets and get the whole office rebuilt,” she recalls. “The home care business wasn’t affected and that kept me afloat.” The following year, the devastating tornado that cut a swath of destruction through North Minneapolis in May caused more than $200,000 in damage to her building, tearing off the roof, blowing out the windows, and leaving three feet of standing water. Watson set up a temporary shop while the building was repaired.

Insurance paid for the damage this time, and during the rehab Watson decided to open North Minneapolis’ first Anytime Fitness club in the portion of the building she had been planning to lease. She hopes to offer senior exercise classes, partially funded by Medicare, through her new franchise, slated to open in the beginning of 2013. Through her Exceptional Home Health office, Watson is currently working with the Minnesota Department of Human Services to sign up local residents for Medicaid and Minnesota Care so they can receive discounts on gym memberships.

Becoming a successful business owner often means maneuvering around obstacles, many of them out of your control. “Most people will quit. They will give up,” says Cynthia Wilson, a certified career counselor at Hired, a Minneapolis-based provider of job-skills training and employment training, and the owner of her own jewelry business, Designs by Cynthia. “The best way to achieve something is to walk around those who have already achieved it, so that when you run into a challenge you will know how to deal with it.”

Along the way, Watson has had many mentors: “Without the people that provided the ladders, I wouldn’t have been able to get over the bridges, and I wouldn’t be here today.”